This page will help you understand how to generate and import additional Authentication XML Signing Keys for the KeyOS MultiKey Service.

Below are the instructions for generating and importing new Signing Keys into the KeyOS platform using only a couple of clicks:

The process of key generation may take a moment (2-10 seconds), but do not close the page.

When the keys are generated, you will see a form as shown below:

Note: You can download your private keys only on this screen before you click the Import button. For security reasons, we do not store your private keys. Please make sure you have downloaded them here.

By clicking “Import,” you import the public key into the KeyOS platform and if there were no errors, you will see a success message in the usual place for KeyOS console notifications in  the upper right corner.

Note: It may take up to 10 minutes for newly imported keys to become active.

Shortly after that, you will be automatically redirected to the list of available Signing Keys where you can remove your keys or alter their state:

If you want to manually import information about your own Signing Key into the system, for example if you have removed the Signing Key from the system and now want return it, you must register each Signing Key’s corresponding public key in the KeyOS platform.

To register the public key(s), select the "Import Existing Public Key" on the Import Signing Key page and you will see the following form:

Browse for the public key and open it to load the information. You will see something similar to what is shown on this image: 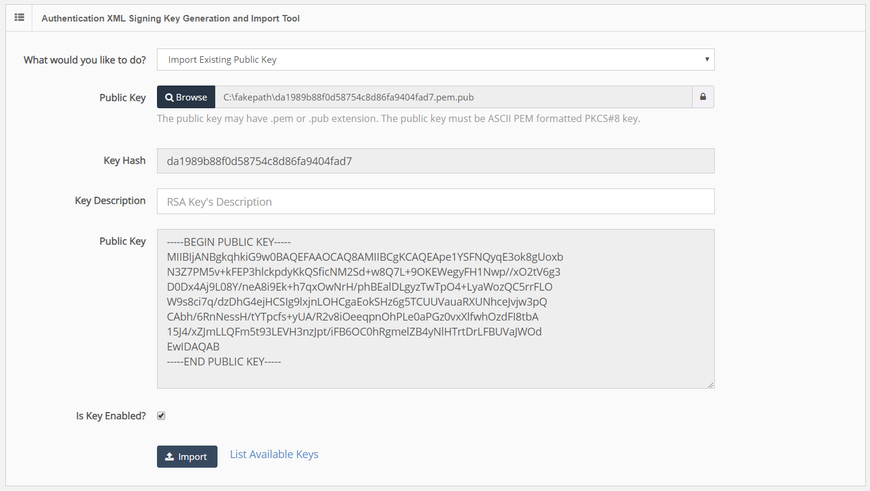 As you can see, the tool loaded the public key information. The Key Hash was automatically extracted from the name of the file - "0d9d23deb76def4a0d685ee43a7db988.pem.pub" and is valid. If you try to import a valid public key with a filename that doesn't contain a valid hash, you will get the following notice: 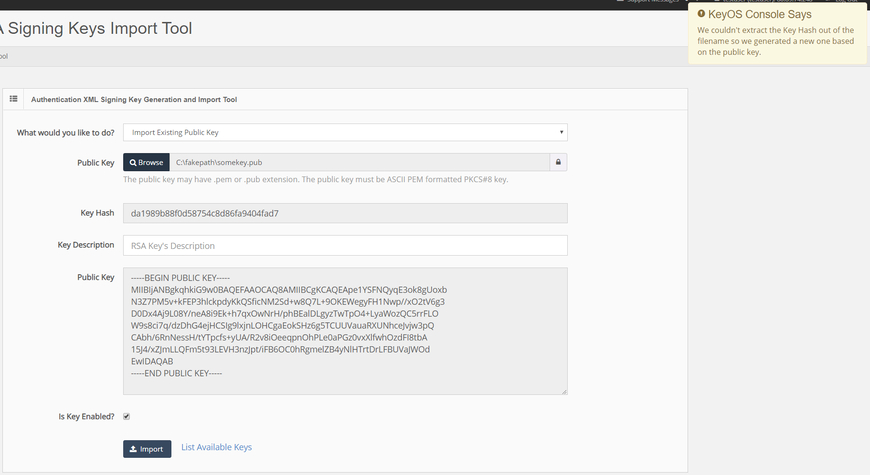 If necessary, you can add the description and click “Import” to import the public key into the KeyOS platform. When the import is done, if there were no errors, you will see a success message and will be redirected to the list of available Signing Keys.